In this dog tags to data tags interview we talk to Craig Thomson, a former Royal Marine who came up with an ambitious plan to leave the services and embrace his affinity for tech. 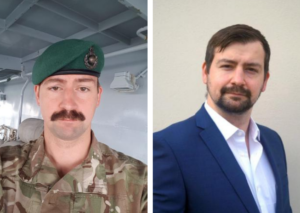 Craig Thomson joined the Royal Marines in March 2012 and finished his service at 3 Commando Brigade in December 2020. Once he’d made up his mind to leave the forces he set his sights on formulating a transition plan that would take him through resettlement and into a career in tech.

As an NCO, Craig was frustrated by the lack of career progression, and felt that he was unable to affect any real professional development change, despite his best efforts. He also wanted more stability for his family, the ability to take his life in different directions and to remove the looming pay-cap.

“Outside there may be no safety nets but there are also no limits.”

When he became tied to a desk job in the Royal Marines he decided that it was time to explore his interest in tech. He recognised that the industry was growing at a rapid rate and potentially that’s where the opportunities would present themselves in the future.

After making the decision to leave, Craig felt apprehensive but knew that the ‘limits’ of a career in the Armed Forces had been removed and now he only had himself to hold responsible for his future moves.

Craig’s ambition for the future made him take preemptive steps to get ahead of the resettlement process.

Craig hoped that by working towards achieving these qualifications twinned with a strong network of contacts in the industry he’d have done enough to secure a job as an InfoSec consultant on civvy street.

“It was the hardest year of my life but I managed it. TechVets helped to keep me on the straight and narrow. Most importantly they helped me to realise my value, which is sometimes fairly difficult for service leavers to do.”

The Royal Marines is a great career choice for so many people; and the aspects of the service that I really enjoyed was the exposure to different people and experiences. Truly, the greatest assets the forces has are its people. The military shapes you, and shows you your strengths and weaknesses in all their glory. Whether people stay in the forces or leave, these qualities and character traits stay with you and are extremely valuable in the civilian jobs sector.”

Increasingly employers are recognising the value that veterans bring to industry, the Royal Marines Ethos summarises why individuals like Craig are so in demand by tech and cyber security recruiters:

The Commando Values in Life

During his period of resettlement, it was these qualities of professionalism, resilience and the ability to self-start that really set Craig apart from other candidates competing for the same jobs.

Combining these character traits and values with a good mentor also kept Craig on track.

“Over the last few years I’ve worked closely with Scott Loader. He’s a great example of how to lead with confidence and compassion. He’s also one of the greatest security minds I have ever met but he hasn’t realised it yet!”

In terms of courses, retraining and support through the resettlement process, TechVets proved to be a constant source of support, advice and encouragement.

“TechVets provided me with a sounding board for my concerns, my plans and some pretty ridiculous ideas. They’ve always provided straight and honest advice without making me feel stupid. They taught me the value of networking and helped me build my confidence. They also patiently read through about 16 versions of my CV without complaint. Absolutely invaluable”.

To round off the interview we asked Craig what his top piece of advice to those considering leaving the military would be.

“The courage it takes to make those clicks is the courage that will make you stand out in civvie street. Just make sure you have a plan before you do it.

“Take your time. You can nail a qualification in a few weeks but it won’t give you the experience you need to succeed. That comes through networking and opening yourself up to the community. The tech/cyber community is one of the most supportive I have ever seen.”