Raising the bar in Tech

In our latest Dog Tags to Data Tags series, we speak to Richard Dunbar a veteran of the Royal Air Force who let the services to pursue a career in tech.

During the pandemic, Richard felt that his job was under threat. As a result, the veteran started to look for new opportunities. He took a gamble and decided to pursue his passion for tech. After contacting the RFEA, the forces employment charity, Richard was pointed in the direction of TechVets. He immediately began upskilling using the mountain of resources available to him. The confidence and knowledge he gained through TechVets encouraged him to apply and subsequently embark on the AWS re/Start program.

“Following the AWS course, I was confident to apply for roles in this sector and was offered a role as an Oracle Trainee Consultant". 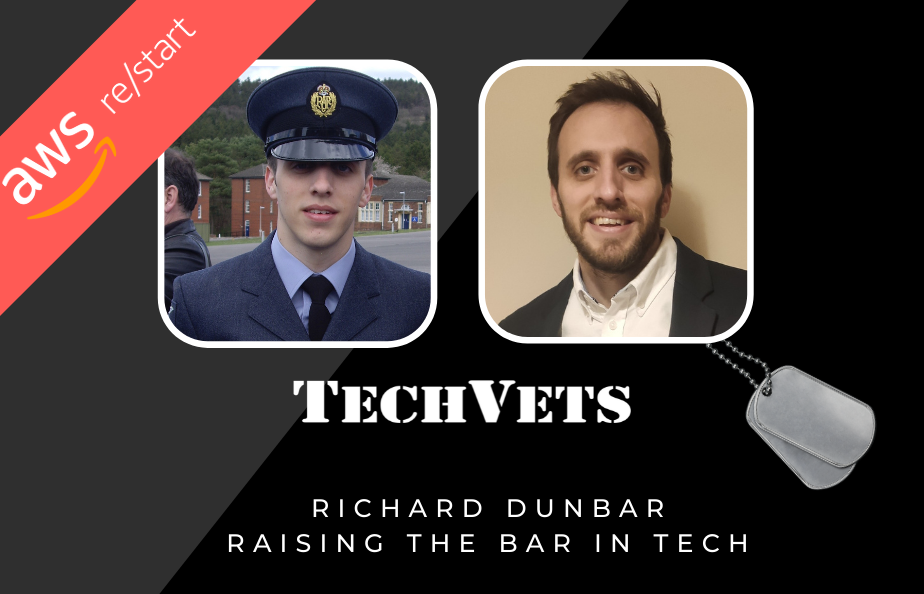 When did you join the military? Joined 4th Feb 2009

Who did you serve with?

Why did you decide to leave?

Joining up from school meant that the only world I had known had been the military. I wanted to experience the world outside the bubble of the forces.

Once you’d signed off, how did you feel?

Initially, it was a great feeling, I was happy with my job after leaving and enjoyed the freedom. However, the job I had was not a career and the reality of searching for work in engineering was quite bleak.

How did you tackle the resettlement process? What was your plan?

There were plenty of resources available when going through resettlement and I feel like I made the most of them at the time. The problem was that I had no long-term plan, no real direction. No amount of resources can give you that direction.

Did you always want to pursue a tech career?

Eventually, I was able to get, what I thought was, a role in engineering that was the best anyone could hope for. Although looking back there was always a nagging feeling that it wasn’t right for me, something I could do but had no real passion for. During the pandemic, the job I was in came under threat, so I reached out to the RFEA and expressed interest in a career switch to tech. The RFEA pointed me in the direction of TechVets and when I began learning more about tech I knew that it was the direction for me. I was enjoying learning and the content really resonated with me.

What did you enjoy about the military?

There are lots of great aspects to the military that I enjoyed, I think most ex-forces would agree when I say that the people you’re with can make it or break it. Fortunately, I’ve been able to keep in touch with most of the ones who made it for me. Second to that though is the progression and development, whether it be career or personal, in the military you are always looking forward, always something on the horizon. I was fortunate enough to earn qualifications and certifications whilst serving and that is an area in which the civilian world has been unable to compete, until now.

What qualities did it give you to survive in the outside world?

This is the hardest to define, joining at a young age the military will surely have molded me in ways I won’t realise. That said, there are certain moments when I have worked alongside other ex-forces in the civilian world, then those qualities are plain to see. If I were to try and define it, I would say commitment. Whatever the task, being fully committed to it, an understanding that anything less does not give a true reflection of yourself.

Do you regret leaving the military?

What were your main concerns when you were leaving the military?

That I wouldn’t be suitable in a role in a civilian engineering firm, imposter syndrome. Despite my achievements/abilities in the RAF, I wouldn’t be good enough to earn a wage “in the real world”.

Who’s been your main role model or mentor?

Tough to pick a single person, I like to think that I pick up a little inspiration, encouragement, and knowledge off every person I meet, to a greater and lesser extent.

How has TechVets and the community supported you?

Without TechVets I would not be in my current position. The resources that were made available to me were what ignited this desire to move to tech. The support from the forum is also fantastic. However, the main reason that I was emboldened to take the plunge into tech was being enrolled on the AWS re/Start course, which I was granted access to from TechVets.

What advice would you give to people in the military who are considering leaving but are too scared to go through the seven clicks to freedom?

Technology Veterans Foundation, is a not-for-profit registered in England and Wales as a Company Limited by Guarantee No. 11919119.