How to plan and prepare for a cyber security career

Adam Malcolm joined the Royal Air Force in May 2013 as an Intelligence Analyst serving with 54 Signals Unit. He subsequently re-rolled as a linguist and after 5 years of service he decided to start planning his exit from the military.

Having joined a bit later in life, by his mid-30s Adam felt ready for a new challenge. He began by scoping out jobs in the civilian sector by attending the Security Cleared Jobs Expo in London.

“Growing up, I hadn’t had much exposure to technology, as we didn’t have much money, it was quite a tech-free household. And later on, I didn’t really know anyone who worked in the industry. The whole thing seemed a bit out of reach to me. But joining the military, where of course these skills are relied upon, you have to adapt and learn. And you end up rubbing shoulders with people of all backgrounds, some of whom have that knowledge and passion for tech – and it’s infectious.” 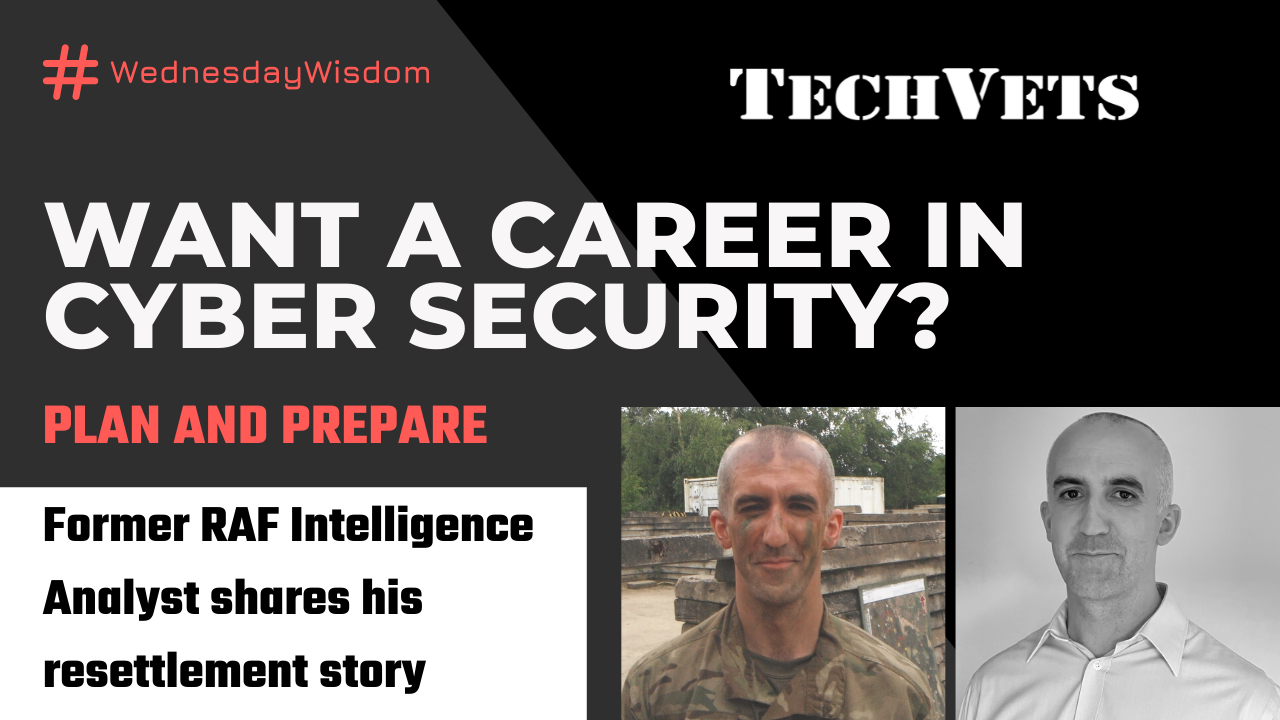 This Security Cleared Jobs Expo had a significant cyber recruitment element to it which sparked Adam’s interest in the tech and cyber security industry. It became apparent to Adam that the path to retraining would be steep, relentless and would take time, so he decided to start learning the new skills he would require for his future life straight away. He realised that he wasn’t getting any younger and time was of the essence. From this point on he began to network with recent service leavers who had made the transition from the military to the cyber security world.

At this point he was introduced to TechVets. Discovering TechVets opened a whole new chapter in Adam’s life. He was able to expand his research and personal study and call on those already working in the sector for advice and guidance. He signed up for free tech courses and certification pathways including the Splunk fundamentals 1 & 2, and was also able to get invaluable hands-on experience through access to labs and gaming platforms.

“I took advantage of every retraining opportunity and cyber related course that I could in the run up to signing off. This included opportunities available through TechVets, the Defence Cyber School, the jHub Coding Scheme and courses run by the QA”.

TechVets provided Adam with a great deal of one-to-one support and guidance to navigate what can be an overwhelming introduction to the industry.

“Ben Full provided feedback on numerous CV iterations, such a critical part of the process. But the combined knowledge of such an experienced community really is invaluable when looking for advice. The forums will often have that thread you’re looking for about the merits of one certification over another, allowing you to make an informed decision.”

At this stage Adam felt ready to leave the services and in January 2021 he submitted his PVR to leave the RAF. When Adam signed off he had mixed feelings. “I felt conflicted initially. I felt anxious about the future. Was this the right choice? What if I hadn’t secured a job by my last RAF pay slip? But it was also a massive weight lifted from my shoulders – the decision had been made, this was happening now. Thereafter the going was smoother as I was free to just focus on study, job searching, and also an impending house move – there was simply no time to reflect and worry.”

Adam was concerned that he wouldn’t find a job and felt that it would be difficult to secure one with most employers wanting to know an individual’s availability before offering a position. “You really have to commit to signing-off before you can secure employment. This a nerve-wracking position to be in, having pushed the button but with nothing yet lined-up. But that’s why taking a long-view of your resettlement is key, giving yourself the best opportunity to prepare before you make the leap into the unknown.”

Adam also knew that he would miss some more of the softer aspects of serving in the military and the people it attracts.

“You’re thrown into working alongside people you would never have otherwise met. You have to make it work, and you do. You face challenges together, and more often than not you find a way to laugh about it. You have deep and meaningful conversations to break the monotony of a 12-hour shift, finding out a lot about others and yourself. You also meet some very inspirational people along the way, and you try to take the best bits of their character and pass that on”.

From decision to actual sign-off was around 2-3 years which gave Adam a good amount of time to complete the following steps to transitioning to a career in cyber tech while still in service: research various career paths, sign up to certifications use his Standard and Enhanced Learning Credits to complete the CompTIA and Splunk certifications complete network fundamentals complete jHub Coding Scheme, which incentivises individuals to study programming languages Before he PVR’d from the RAF Adam also used his time to build his LinkedIn profile and study the way in which other service leavers had tackled a similar transition path.

“I reached out to a lot of people for advice, which is how I heard about TechVets (thanks Hannah!). But in general, I wasn’t ruled by any particular date, and I only signed-off and initiated the resettlement process when I felt ready and suitably skilled-up.”

From the point of signing off Adam spent the first few months of 2021 taking part in intensive lessons supported by two contacts he had met through TechVets, Peter and Sush at DT-Squad. They offered their support free of charge and shared their experience of coding with Adam to help him get set up for success. Concurrently, Adam was attending TechVet’s virtual fireside chats. This is how Adam discovered Networkology who were presenting at the event. He got introduced to employee Chris Morris, a 2019 service leaver and James Morgan, the company’s director.

“I liked the impression I got of the company, and its ethos. Again I used TechVets to chat with and question Chris and another service leaver, Ian Goddard, who was a few months ahead of me and had already been recruited.”

The chat went so well that following his last day in uniform in August 2021, he went on to start with Networkology in October 2021.

Adam’s military experience gave him a lot of transferable skills and throughout the time he survived his softer skills were also honed.

“I probably err on the side of introversion, and the military helped balance me out in that respect! It also gives you a healthier perspective on life’s problems – if you can face the pressures of that kind of work, then those on the outside world seem that bit more manageable.”

Adam attributes a lot of his success to the mentors and role models that he has been exposed to throughout his career.

“Peter Brookes-Smith and Susanta Ghosh of DT-Squad were especially generous with their time and their combined experience and advice was invaluable. Their intensive coding classes were an education unrivalled by any learn-on-demand course, and they provided a unique window into the software development industry for those considering the move. Later on, when exploring the opportunities available through Splunk, I also connected with Chris Morris and Ian Goddard, who expertly guided me through the world of Splunk certs and complementary skills such as Cribl, and eventually identified me as a suitable candidate for recruitment. The guidance of both groups was pivotal in getting to where I am today.”

Adam’s top tips for other military personnel who are thinking of making the transition to the tech and cyber security industry?

“I would never say ‘just do it’. You need a plan, and you need time to prepare. So start your research early, start building your LinkedIn profile and CV early, and get acquainted with TechVets. Also, try things, sign up for courses, discover what you’re passionate about or have an aptitude for. Take advantage of the courses and resources available to you while you’re still serving. And reach out to people, speak to those who have gone before – people are amazingly generous with their time and more than happy to help you on your journey.”